WASHINGTON, DC – Several hundred more of Hillary Clinton’s emails were released earlier today by Wikileaks and they show Clinton was in regular contact with various pharmaceutical companies discussing the possible production of a vaccine against Donald Trump.

According to one of the emails, Clinton asked Merck CEO Dr. Mark Webber if they “were any closer to producing a vaccine which would either prevent people from believing Trump’s rhetoric and/or prevent xenophobia from infecting the human brain.”

Throughout the campaign and even after she lost the election, the emails continued with both Merck and GSK, two of the largest vaccine producers in the world.

“First of all, I don’t even think you can make such a vaccine, and secondly, it is in very poor taste of Mrs. Clinton to even try,” said Vice-President Elect Mike Pence. “Even if they did somehow make a vaccine like this, I would hope the American people would be smart enough not to get it, assuming of course it is full of all the same toxins as regular vaccines.”

Wikileaks also released several text message conversations between Clinton and Dr. Mark Webber (Merck Pharmaceuticals) showing they had similar worries; that people would not willingly get the new vaccine.

They discussed several other options, from adding it to drinking water, sneaking it into this years flu vaccine, but eventually settled on the more tried and true method of spreading vaccines and other harmful products on the American Public: chemtrails. 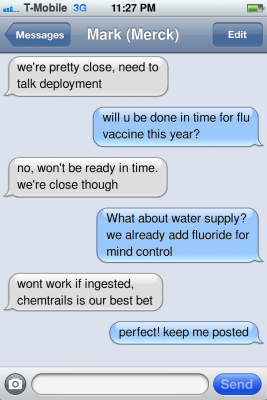 Although not confirmed as of yet, we advise everyone to watch the skies and spray vinegar at any and all chemtrails you see, I mean, you don’t want to look stupid or anything.