NEW YORK – The first presidential debate was watch by millions of people across the country, at least 5% of whom are science-illiterate anti-vaccers, according to the latest viewership polls.

Experts agree that Donald Trump missed out on a yuge opportunity to rant about the dangers of vaccines and their link to autism.

“Trump could have really secured the science-illiterate vote last night,” said political scientist Mark Campbell. “If he would have talked about how getting “too many too soon” leads to autism in children, he really would have won the hearts and minds of the anti-vaccine cult members.”

Trump is a well-known science-illiterate and is mostly loved by the anti-vaccine community after he tweeted about vaccines and their link to autism:: 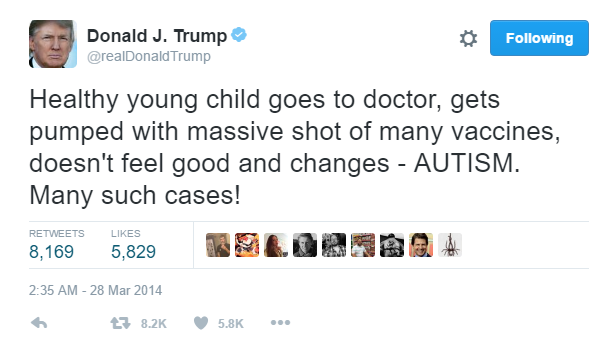 Trump also believes global warming is a hoax created by the Chinese:

While Trump has a large lead in the climate change hoax demographic, he really could have and should have brought up vaccines and autism during the debates to lock up the anti-vaccine cult vote.

“There are still a few debates left and if I’m on Trump’s staff, I’m making it clear to him that he has to bring up thouroughly debunked medical myths in order to secure some more votes,” said Campbell. “But we’ll have to wait and see.”