ASHBURN, VA – A baby group is in hot water today after they reportedly asked presidential nominee Donald Trump to leave their baby group after he began to cry.

The incident occurred at the Happy Panda Toddler Daycare in Ashburn, Virginia where Trump was visiting in hopes of garnering some positive press. Unfortunately, when he began to talk about his failed business ventures and haircut, he began to cry.

Reports indicate that at first the babies said he could stay and they actually liked the sound of an adult crying. However, only a few minutes later they told him they were just kidding and the anti-vaccer really did have to leave.

“He was really loud and annoying,” said 4 year-old Madison. “He is weird.”

Trump tweeted out about the incident just hours after: 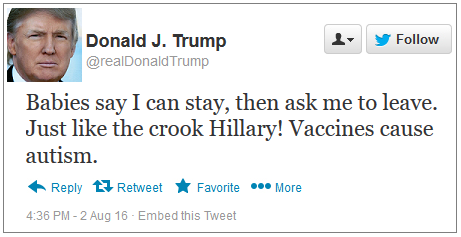