Researchers at Johns Hopkins University announced that for the first time, they had discovered an anti-vaccine meme which was completely honest and accurate. The meme features a cartoon of a baby and the words, “I consent to being forcibly restrained and injected with multiple viral strains, preservatives, and heavy metal adjuvants. Said no baby ever.”

According to lead researcher Karen Howell, “We surveyed over 12,000 parents and can confirm that no baby ever uttered those words. Moreover, we have consulted with top linguists from around the world and they assure us it is implausible to even consider that a baby could make such a statement.”

Jane Ware, a representative from the Facebook page Refutations to Anti-Vaccine Memes, which is dedicated to exposing the falsehoods and misleading statements of the anti-vaccine movement, told The Spudd, “This is one we simply can’t counter.  A baby has never said those words. For the first time, the anti-vaccine movement has been completely honest and straightforward. We tip our hats to them.” 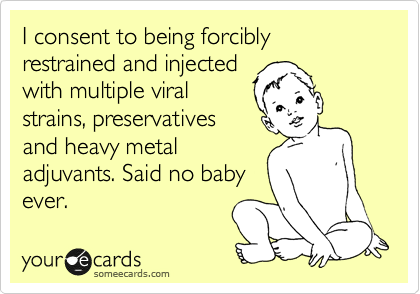