A Farmer Helps His Ewes Give Birth As Lambing Season Begins

WESTBURY, UNITED KINGDOM – MARCH 21: A newborn lamb and its mothers stand in a field on a farm in the Wiltshire village of Edington, on March 21, 2013 near Westbury, England. Despite the poor weather the lambing season, which normally runs from February to May, is well under way and many farmers across the UK are on the lookout for signs in their flocks of Schmallenberg disease, a virus that can result in congenital disorders and stillbirths when infection takes place during the early stage of pregnancy. (Photo by Matt Cardy/Getty Images) 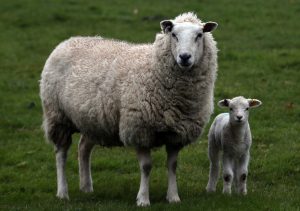