This thin-section transmission electron micrograph (TEM) revealed the ultrastructural appearance of a single virus particle, or virion, of measles virus. The measles virus is a paramyxovirus, genus Morbillivirus. It is 100-200 nm in diameter, with a core of single-stranded RNA, and is closely related to the rinderpest and canine distemper viruses. Two membrane envelope proteins are important in pathogenesis. They are the F (fusion) protein, which is responsible for fusion of virus and host cell membranes, viral penetration, and hemolysis, and the H (hemagglutinin) protein, which is responsible for adsorption of virus to cells.

There is only one antigenic type of measles virus. Although studies have documented changes in the H glycoprotein, these changes do not appear to be epidemiologically important (i.e., no change in vaccine efficacy has been observed).

Prior to 1963, almost everyone got measles; it was an expected life event. Each year in the U.S. there were approximately 3 to 4 million cases and an average of 450 deaths, with epidemic cycles every 2 to 3 years. More than half the population had measles by the time they were 6 years old, and 90 % had the disease by the time they were 15. This indicates that many more cases were occurring than were being reported. However, after the vaccine became available, the number of measles cases dropped by 98 % and the epidemic cycles drastically diminished.

Measles virus is rapidly inactivated by heat, light, acidic pH, ether, and trypsin. It has a short survival time (<2 hours) in the air, or on objects and surfaces. 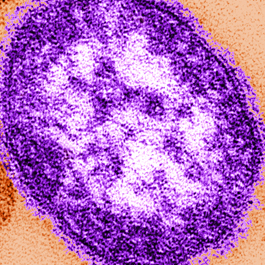